WHAT IS THE HISTORY OF ENGINEERING DRAWING 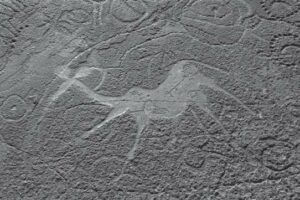 prehistoric humans created images on cave walls and rocks as a form of communication for hunting and gathering societies, to provide ritual or spiritual meaning, and for decoration.

Prehistoric drawings and paintings, known as pictograms, and carvings, known as petroglyphs, show a variety of animals and human shapes. Pictograms and petroglyphs are not engineering drawings, but they do represent early graphic forms of communication. For thousands of years, designers of ancient structures and machines used sketches, drawings, and documents to represent inventions and architecture and help design and distribute information to workers. However, activities such as farming, craft making, and toolmaking, and construction generally followed established standards of the time without the use of formal drawings as a guide. Production was more like a form of art than engineering, and each item was unique.
Early engineering drawings representing machines and buildings appear in the fourteenth and ﬁfteenth centuries. These drawings were generally in the form of pictorial sketches with written descriptions that helped workers understand the intent of the drawings for fabrication or building. Early engineering drawings served as a reference for craft workers to construct a building or manufacture a product. Craft workers viewed the drawings and written descriptions and made interpretations based on their own experience and knowledge of current standard practices. Speciﬁc dimensions were not necessary, because each building or machine was different. Early engineering drawings were also an art form used during presentations to the persons who requested the designs.

Most early creators of engineering drawings were artists and inventors. Some of the best-known early engineering drawings are the work of Italian Leonardo da Vinci. Leonardo is well known for his art, such as The Last Supper in 1498 and the Mona Lisa in 1507. He was also an inventor who designed machines such as the glider shown in Figure and military equipment such as the giant crossbow. Leonardo’s drawings were those of an artist and were not in the form of engineering drawings. Leonardo’s drawings were pictorial and generally without dimensions. No multiview drawings of Leonardo’s designs are known to exist. Multiview drawings are 2-D drawings of objects organized in views.
Skilled tradespeople worked from the pictorial sketches and representations to construct models of many of Leonardo’s designs. Each machine or device was unique, and parts were not interchangeable. Leonardo was also an early mapmaker. In 1502, Leonardo created a map containing the town plan of Imola, Italy. Authorities commissioned Leonardo as the chief military engineer and architect because of this mapmaking. Arguably, this early work was more artistic than the beginning of engineering drawing, but this work holds a special place in history.
Approximately the same time as Leonardo da Vinci created his drawings, awareness developed that drawings require greater accuracy and dimensions. An early author of architecture and engineering was an Italian man, Leon Battista Alberti. Leon’s writing covered a wide range of subjects, from architecture to town planning and from engineering to the philosophy of beauty. In 1435 and 1436, Leon also wrote two works that explored the need to incorporate more geometry in drawings. Leon also proposed drawings with multiple views rather than the commonly used pictorial drawings.
The importance of using multiview two-dimension drawings was also inﬂuenced by the development of descriptive geometry in the work of French philosopher and mathematician René Descartes (1596–1650) and the work of Frenchman Gaspard Monge (1746–1818). René was the inventor of the Cartesian coordinate system, and he founded analytic geometry, the link between algebra and geometry. The Cartesian coordinate system uses numerical coordinates to locate points in space according to distances measured in the same unit of length from three intersecting axes. The Cartesian coordinate system is the basis for establishing points when using CADD today. 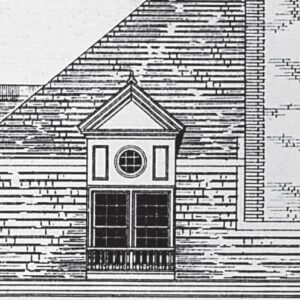 Gaspard Monge created a large-scale plan of a town using his own methods of observation and instruments that he designed. As a result, authorities commissioned Gaspard as a drafter and pupil in the practical school of the military institution. Given a project to design a proposed fortress, Gaspard used his geometrical method to create the design quickly. Continuing his research, Gaspard arrived at a graphic method of the application of geometry to construction, now called descriptive geometry. Descriptive geometry is the system of graphic geometry that uses plane projections to describe and analyze their properties for engineering drafting applications. 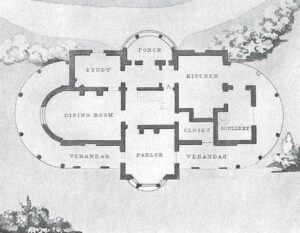 Many early drafters had degrees in engineering and began to realize the importance of creating accurate and detailed engineering drawings. However, much of the drafting was in the form of line drawings, with watercolour paints used to high-light the drawings as shown in the architectural elevation of a home. Drawing continued to be basic line drawings with little dimensioning practice. An example is the early architectural ﬂoor plans shown in Figure used to construct a home. Craft workers also followed architectural details such as the gable design shown in Figure. There were few if any dimensions and standards, so each building was similar but different. This practice lasted until the early part of the twentieth century. 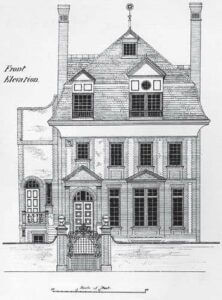 Into the late 1800s and early 1900s, inventors, engineers, and builders worked on each product on a one-of-a-kind basis. Manufactures produced parts from hand sketches or hand drawings on blackboards. American engineer and inventor Coleman Sellers, in the manufacture of ﬁre engines, had blackboards with full-size drawings of parts. Blacksmiths formed parts and compared them to the shapes on the blackboards. Coleman Sellers son, George Sellers, recalls lying on his belly using his arms as a radius for curves as his father stood over him direct-ing changes in the sketches until the drawings were satisfactory. Most designs used through the 1800s began as a hand sketches of the objects to be built. Workers then converted the sketches into wooden models from which patterns were constructed. Some companies followed this practice well into the twentieth century. An example is Henry Ford and his famous blackboards. What was new, though, was that the blackboards were also the Henry Ford drafting tables. Henry would sketch cars and parts three-dimensionally and have pattern makers construct full-size wooden models.

The Inﬂuence of Interchangeability

The Industrial Revolution was a period from the eighteenth to nineteenth centuries when major changes took place in agriculture, manufacturing, mining, and transport. The need for interchangeability in manufactured products became important during the Industrial Revolution. Interchangeability refers to parts manufactured identically within given tolerances. interchangeable parts are produced to speciﬁcations that make sure they are so nearly identical that they ﬁt into any product for which they are designed. One part can replace another of the same part without custom ﬁtting. Interchangeability allows easy assembly of new products and easier repair of exist- ing products while minimizing the time and skill required for assembly and repair.

Early engineering drawings were often works of art and commonly made with ink. Drafters initially drew using a pencil, T-square, triangles, scales, irregular (French) curves, and drawing instruments such as compasses and dividers. Drafting textbooks as late as the fourth edition of this textbook spent pages describing how to sharpen, hold, and properly use pencils to draw quality uniform lines. Drafters often traced original pencil drawings onto cloth using pen and ink. Drafters always paid skilled attention to lettering quality on drawings. Engineering drafters would use a speciﬁc lettering style referred to as vertical uppercase Gothic. Architectural drafters used a more artistic style of lettering that deﬁned their drawings as uniquely related to their discipline. Over the years, various templates and other devices were introduced that allowed drafters to produce consistent quality lettering, although most professional drafters preferred to make quality freehand lettering. 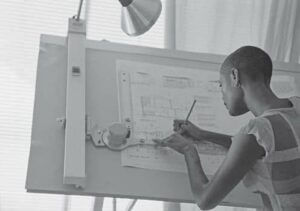 Drafters initially created drawings by hand on a drafting table referred to as aboard. An advance in drafting occurred with the introduction of the drafting machine, which replaced the T-square, triangles, scales and protractor for creating drawings. The drafting machine mounts to the table or board and has scales attached to an adjustable head that rotates for drawing angles. When locked in a zero position, the scales allow drawing horizontal and vertical lines and perpendicular lines at any angle orientation. There are arm and track drafting machines. The arm machine has arms attached to a mounting bracket at the top of the table. The arms control the movement of the head. The track machine has a traversing track that mounts to the table and a vertical track that moves along the horizontal track. The machine head traverses vertically on the track as shown in Figure.

Many architectural drafters used a device called a parallel bar, is a long horizontal drafting edge attached to each side of the table that moves up and down on the table. The parallel bar allows the drafter to draw horizontal lines, and triangles are used on the bar to draw angled lines. During the decades after World War II, drafting equipment suppliers introduced a variety of materials to improve the productivity of the drafting process.

About the same time as interchangeability became important and engineering drawings were evolving, preserving, and duplicating original drawings became important. There was a need to reproduce drawings easily for distribution to manufacturers or builders, so the blueprint process developed. A blueprint is a contact chemical-printing process of a drawing or other image copied on paper with white lines on a blue background. As drawing reproduction evolved, a diazo process that created blue line copies with a white background replaced the blueprint process. Until recently, all drawing reproductions were commonly referred to as blueprints. Today, ofﬁces use printers, plotters, and engineering copiers that use xerography to reproduce CADD drawings. The generic term print has replaced the term blueprint.

During the 1980s and 1990s, CADD rapidly became a technology to take seriously. Companies began considering the power of CADD as computer systems and CADD software developed capabilities and features that made them useful in producing professional drawings. Drafters who had used manual drafting for their entire careers had to face the challenge of converting their artistic skill into drawings created using a computer. This was a difﬁcult challenge for many drafters. Soon schools began teaching drafting technology using CADD. This gave the traditional manual drafters an opportunity to learn the new technology and for new trainees to develop CADD knowledge and skills at the entry-level. 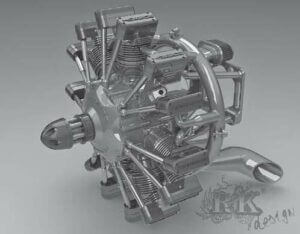 In the 1980s, schools started teaching CADD in their curricula by adding a few computers into the traditional manual drafting program. Eventually, half of the typical classroom was equipped with traditional drafting tables and the other half was CADD workstations, or the school would open a separate CADD lab to teach courses. This plan closely paralleled what was happening in the industry for those companies that were taking CADD seriously. By the 1990s, many schools and companies were starting to make the complete transition to CADD by replacing manual drafting tables with CADD workstations. Today, CADD accounts for almost all design and drafting. The figure shows a 3-D model of an aeroplane engine, which demonstrates the power of CADD for designing products.