WHAT IS THE ENGINEERING DESIGN APPLICATION

Engineering drawing and design is a broad subject that includes a wide range of theory and practice. Many different forms of drawing exist. Drawing occurs while at the lunch table as a basic sketch of a new product idea drawn on a napkin. Drawing also occurs in the form of a series of very complex models for a new automotive design and as hundreds of formal drawings needed for the construction of a skyscraper. You will learn the purpose and requirements to create meaningful engineering drawings as you use this textbook to study engineering drawing and design.

From an Idea to a Product

Design ideas and engineering projects often establish or occur in informal settings. For instance, the engineer of a hand-tool manufacturing company was using a typically adjustable wrench to complete a common home-repair task. While using the wrench, the engineers discovered that it was difﬁ cult to access a conﬁned location to remove a nut on a piece of equipment. The engineer imagined how the company could design, manufacture, and market a new wrench with features that help make the tool usable in cramped locations. The next day, the engineer and a colleague from the drafting department met for coffee. The engineer sketched the idea for the new wrench on a napkin to communicate the design to the drafter. 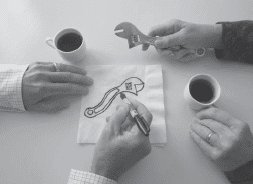 The drafter copies and then revises the existing design according to the engineer’s sketch (see Figure). The drafter presents the new model to the engineer, who is pleased with the results and requests a rapid prototype. Rapid prototyping (RP) is the process of creating a physical and functional model from a computer-generated 3-D model, using an RP machine, also known as a 3-D  printer. RP machines are available that build prototypes from various materials such as paper and liquid polymer. The hand-tool company does not have an RP machine, so the drafter sends ﬁles of the design to a company that specializes in RP. The drafter and engineer receive a prototype two days later. 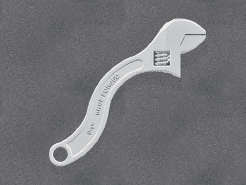 The figure shows the prototype of the new wrench design. The design team tests the prototype in an application similar to what the engineer experienced at home. The prototype worked as expected. 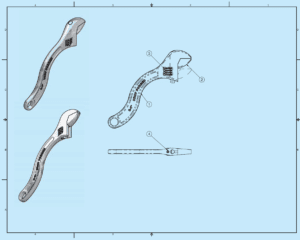 By the next afternoon, the drafter completes the set of working drawings shown in Figure and sends the drawings to the manufacturing department to manufacture and assemble the new product. The manufacturing department needs lead time to design and make the forging dies required to reproduce the parts. Lead time is the time interval between the initiation and the completion of a production process. Forging is the process of shaping malleable metals by hammering or pressing between dies that duplicate the desired shape. The hand-tool company is small, so the drafter is also responsible for creating catalogue art and copy for marketing the product. 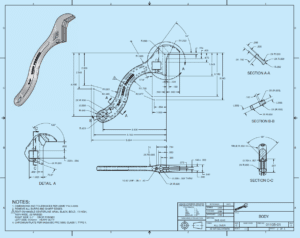 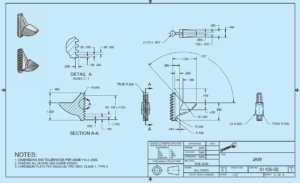 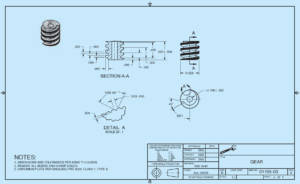 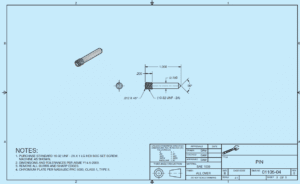 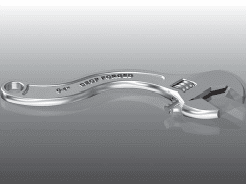 Less than two months after the engineer had the initial idea, the first production run of new wrenches is ready to sell. The figure shows the finished product.