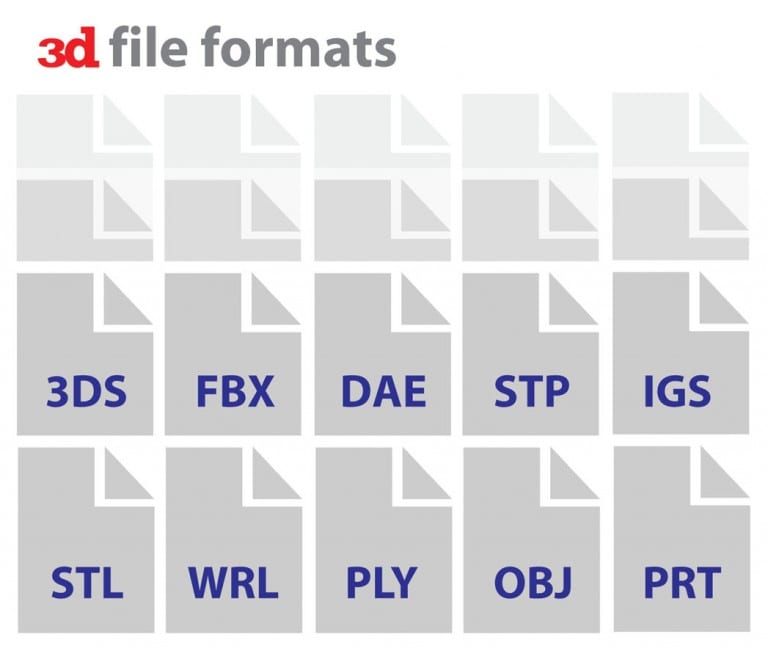 Digital Model Formats - The Many Flavors of 3D CAD

We’re going to take a little pause here for a mini-chapter. We’ve talked about the many things you can do with a CAD model but that can lead to some questions. How can I use an OBJ file and how is it different from an STL? Can an IGES and a STEP file essentially be used for the same thing?

These are what we call the “Flavors” of CAD and we’re here to provide you with a shortlist to help clear up some details.

From the list above you’ll notice that some CAD formats are considered neutral, specifically IGES and STEP formats. These two formats were specifically created to neutrally exchange 3D CAD data across different CAD packages.

IGES was created in 1979 by a group of users (including Boeing and GE) with support from the Department of Defense (DoD) and NIST to exchange data more easily. Since the late ’80s, the DoD has required that all Digital Project Manufacturing Data (PMI) be deliverable in IGES format.

STEP is an ISO standard released in 1994 to be the “successor” to IGES. While widely used it has never totally replaced the IGES format.

While the above examples are standard across CAD packages, many industries, such as Architecture and 3D modelling for computer graphics have their own packages and files types. We like to think of these as extra flavours, like CAD dessert.

3D Graphics – 3D graphics formats are generally proprietary according to package. Some popular graphics programs are 3D Studio Max, Maya and Lightwave. Popular gaming companies such as Blizzard Entertainment and other film studios often develop their own in-house formats. However, many consumer 3D graphics packages can import OBJ files.

3D Modeling for Architecture – A new style of modelling for facilities, such as buildings and processing plants, is developing rapidly. This new CAD software contains a relational database component to store metadata for the design entities, such as the style and make of windows or doors or the schedule of the I-beams and piping. This new class of software is termed BIM for Building Information Modeling and is working to combine facilities management into the database concept as well.

The above examples are just a small taste when it comes to the “flavours” of CAD, but they are the most common files used. Hopefully, this little list has helped a bit. If you have any questions you should just ask your 3D service provider and they will be happy to help. You can always ask us questions at [email protected]