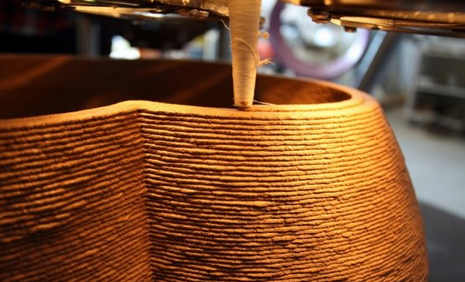 By increasing material manufacturing on Earth and other planets rapid build houses and tightening budgets is a very interesting point of view, more than one reason. In space, which will provide us with a lot of design flexibility for those unique, highly functional but can not simply be assembled with other methods of building to make way.

On our own planet, 3D printing houses will become more common, the United Nations predicts that the world's future will add almost 100,000 new homes a day within five years.

Compared to other houses, the cheap and fast to build housing units made to make by earthquakes, cyclones and floods and other natural disasters in the affected areas recover quickly. In case of emergency, cost, energy and material restrictions it is very large, so people need never unusual sources of inspiration.

We can say that no one can do better than potter wasps (wasp/hornets) better, it methodically countless layers of mud everywhere covering layers, eventually forming nest-like pottery. For its part, the industrious insects may be the world's smallest (and most environmentally-friendly) 3D printers.

Italian engineering company manufacturing a variety of sizes WASP 3D printers, recent plan to follow its name, build a shelter for human habitation. Last year, the company exhibited a 4.5-meter printer that can handle simple and highly flexible material, such as mud, clay or natural fibres. Now, the company is even higher to create 3D printers, 12 meters high in this 3D printer is called the Big Delta.

It consists of a 6 m diameter solid metal frame support, with simultaneous rotation of the nozzle mixer functions can be uniformly printed material, it is said to work just ten watts. It can use a variety of materials, from clay to clay, and can be reinforced with a small number of chemical additives on the structure. It is also possible to use cement, but this will contradict with the company's green initiatives.

The company said it through 3D printing houses to provide health assistance to the affected areas, such as on the walls of houses repellents.

Since 3D printing house in shape, size and material selection are very resilient, so its potential is far more than meet the needs of developing countries affected areas. In fact, WASP represents the southern coast of Sardinia Iglesias town have shown interest in the Big Delta, the recent use here has the first printer built out of housing units.

Big Delta will be exhibited in Rieti, Italy Lazio region, it will also become the focus of the stage.