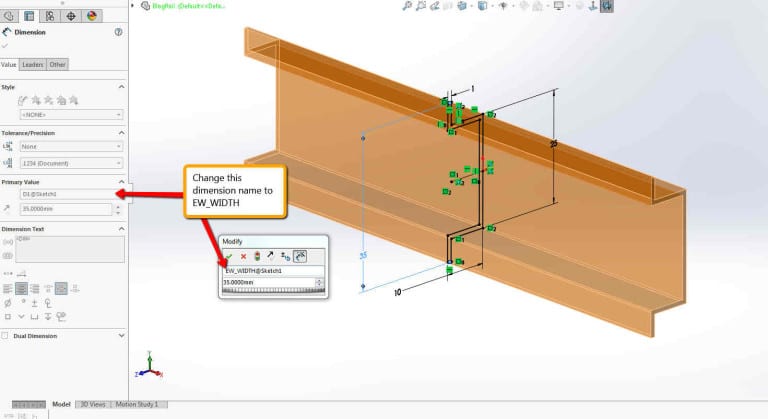 2D and 3D Layout of SOLIDWORKS

Electrical cabinet makes use of ducts and/or rails for routing of wires & cables, and also for mounting of other components. Their representation in 2D is by line art symbols, and as SOLIDWORKS Parts in 3D. The 2D symbol is connected with a manufacturer’s part data through the database.

Although the manufacturer’s database has a number of standard ones, sometimes we need to add a custom one that better suits our needs.

Let’s take a look at creating a 3D part that can adjust to the length, and profile dimensions that suit our needs better than stock size.

To begin, there are several rules that we need to observe. The ability for the software to automatically make the adjustments depends on these.

Open a new part in SOLIDWORKS and set the configuration name to “EW_CONFIG”.

Create a 2D sketch and profile with dimensions for the width and height.

Create the base extrusion using EW_SKETCH.

Then the top and front via the TREWRAIL35 option.

For a duct, we will also want to include a routing path. For this, I created a simple 3D line sketch oriented along the length of the part. Then, used the Create Routing Path tool in SolidWorks Electrical to convert an existing sketch. The tool automatically names the feature.

Save this part in a suitable location for use with SOLIDWORKS 2D. In a component’s manufacturer’s part data in the SOLIDWORKS Electrical 2D environment use this for the 3D part. The size values defined in the 3D part, EW_CONFIG, will be the minimum values. You can be greater than that in the 2D Manufacturer’s parts database, but not less than.

In the cabinet, layout use inserts duct or rail depending on the need. In the manufacturer’s part data we select the new part we created that is associated with our new 3D part.

Use the insert function to insert the electrical 3D model into the cabinet layout. You will need additional mating to fully define the orientation. “Insert as…” does not work with custom rail/ducts yet.

Now, when in SOLIDWORKS 3D the length can be adjusted by using the Change Length of Rail or Duct tool.

In this case, I set a new length of 500mm. This also updated the 2D application as well.

With the basic rules in mind, you should now be able to create and use your own customized rail or duct part files for SOLIDWORKS Electrical.